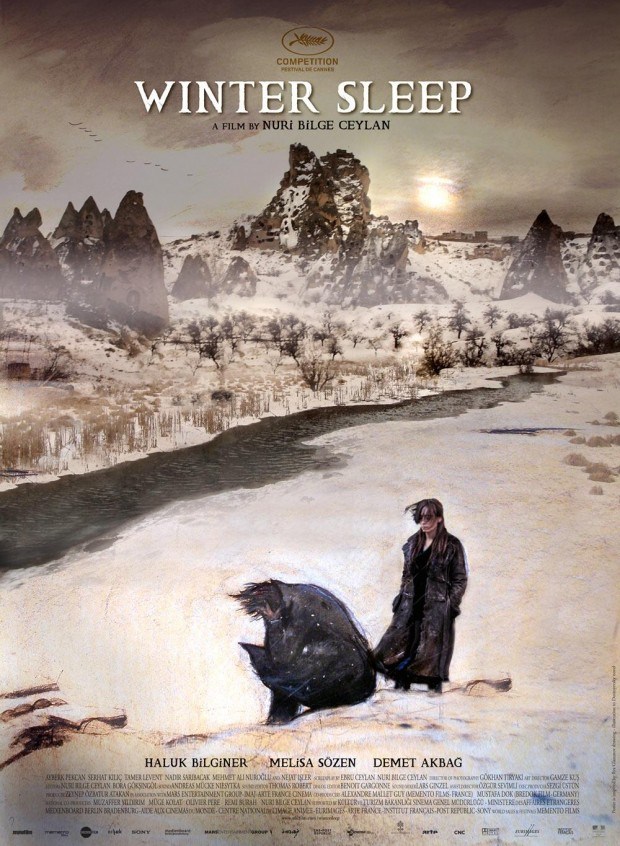 The Cannes Film Festival wrapped up on Saturday with the announcement of this years Palme d’Or winner. The Turkish film WINTER SLEEP took home the festivals highest honor. The 3 hour and 16 minute film was directed by Nuri Bilge Ceylan.

Summary of plot from IMDB:

Aydin, a former actor, runs a small hotel in central Anatolia with his young wife Nihal with whom he has a stormy relationship and his sister Necla who is suffering from her recent divorce. In winter as the snow begins to fall, the hotel turns into a shelter but also an inescapable place that fuels their animosities.

Quentin Tarantino and Uma Thurman announced the winner of the Palme d’Or.

It’s doubtful that WINTER SLEEP will be a movie that Americans run out to see. Deborah Young of The Hollywood Reporter writes a mostly positive review, but also notes:

Here, things are different. The 3½ hour running time takes no prisoners even among art house audiences and demands a commitment to attentive viewing that, despite the film’s sometimes terrible longeurs, pays off in the end. But the challengingly long dialogue scenes, shot in brazenly elementary shot-countershot style, will further challenge audiences who lack excellent subtitle-reading skills.

Past Palme d’Or winners rarely make it to the Oscar race. Mostly because the Oscar world and the Cannes world look at films completely differently. Hollywood is about big stars and the almighty dollar. The “real” cinema world rewards the art. Although many would disagree, the Oscars are a part of Pop Culture. Something Cannes juries could care less about. Only 2 movies that have won the Palme d’Or went on to win Best Picture at the Oscars. Billy Wilder’s 1945 LOST WEEKEND and MARTY starring Ernest Borgnine in 1955. Plenty of Cannes winners have gone on to get Oscar nominations, including TAXI DRIVER, ALL THAT JAZZ, THE PIANO, PULP FICTION and M*A*S*H. Last years winner BLUE IS THE WARMEST COLOR turned out to not be eligible for an Oscar because of it’s late release. In 2012 Palme d’or winner AMOUR was nominated for 5 Academy Awards including Best Picture. The year before, THE TREE OF LIFE was also a Best Picture nominee.

While WINTER SLEEP may not go to the Oscars, other festival winners like FOXCATCHER, MAPS OF THE STARS and MR. TURNER just might.

Best Actress
Julianne Moore for Maps to the Stars

No More Oscars For The Pwc Accountants