Christopher Nolan’s Dunkirk doesn’t waste anytime. It gets right to the action. No time for character development, no time for introductions and no time for senseless drama. You are overwhelmingly immersed in this epic at the first frame. This film about the Dunkirk evacuation is not your conventional war movie. Nolan throws you right into the middle of the race against time to rescue hundreds of thousands of Allied troops from a beach in northern France in the early summer of 1940. 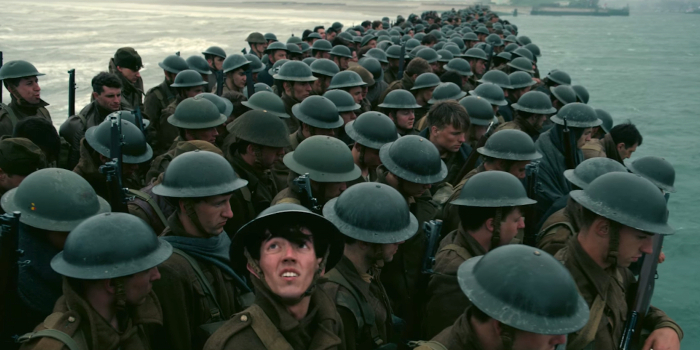 Right from the start Hans Zimmer’s score sucks you into the action. This puts you right there with teenage soldier Tommy (Fionn Whitehead) as he races to get off the Dunkirk beach. We are put into a small boat driven by Mark Rylance, a skipper sailing across the Channel. One of the civilian boats called to safe the stranded soldiers. We are also in the cockpit of Tom Hardy’s fighter plane as he fights to provide air support to the rescue efforts on the beach

These are the three separate storylines that take place in three different time frames. One week on land, one day at sea and one hour in the air. Nolan plays with the timeline of each story to give us incredibly suspenseful drama that conveys the panic, terror and endurance of these soldiers. Nobody gets back story or a history of their experiences. No heroic speeches.

Dunkirk has so little dialogue that it could worked have worked with none at all. The sounds of the war are enough to highlight the terror. In fact, the few words that are spoken are in a heavy British accent that for me it was pretty much unintelligible. From what I could gather Tommy meets another solider played by Harry Styles. Not sure why Styles was cast with this group of mostly unknowns, but he is credible as one of the desperate survivors.

Nolan likes shooting on film and despises CGI. He uses real WWII planes and boat replicas which accounted for much of the films budget. Hundreds of extras were used to represent the thousands on the beach without the use of CGI. Nolan shot the entire film using IMAX cameras, which are big, bulky and added to the challenge of shooting in the air and underwater. He accomplishes it all with tremendous detail. 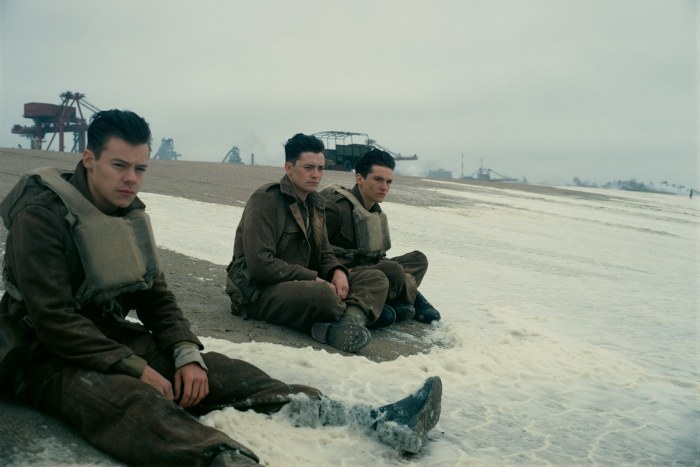 There is no question that Dunkirk looks and sounds great. Non-stop action from start to finish. Never a dull moment. Without a doubt it is the best movie of the year so far. If there is anything critical to say about Dunkirk it would be the lack of character history. I would have cared more about their fate if I know a little bit more about who they were and where they came from. It was difficult to get the feeling of despair on the beach that was no doubt felt in real life. One scene of a soldier seemingly swimming to his death is the only time we see the hopelessness. Dunkirk is not the greatest war movie if all time, but it certainly belongs on the list of one of the best.

I don’t know how Dunkirk can get ignored at Oscar time. It can easily get nominations for Best Picture, Best Director, Sound Editing, Sound Mixing and Cinematography.