This will be the million dollar question throughout the upcoming Oscar season. Most agree that Leonardo DiCaprio is long over due for an Oscar win. He has been nominated 5 times.

Based on the novel by Michael Punke, THE REVENANT is based on true story.  DiCaprio plays Hugh Glass, a fur trapper who is injured in a fight with a bear. His colleague John Fitzgerald played Tom Hardy robs him and leaves him for dead, but Glass survives and promises revenge on Fitzgerald.

The trailer was released this week, officially kicking off his Oscar campaign.

Regardless of which actors and actresses win on Sunday night, everyone has their own personal favorites. Here are some of mine:

The Golden Globes have a history of predicting Oscar winners. Even after the Academy moved up their due dates. Oscar ballots were due 4 days before the Globes happened, but last year all four of the academy’s acting picks came from the Golden Globes. Over the past 20 years, the Globes have chosen actor Oscar winners 80% of the time. The Oscar voters have their nominations in, but they still need to vote for the winners. The Golden Globes become an audition for Oscar night. If a Globe winner gives a good speech and comes across as likable, their chance at an Oscar goes way up. Sunday Night Leonardo Dicaprio, Matthew McConaughey , Jared Leto and Alfonso Cuaron. All had great speeches and the AMPAS wants them giving speeches on Oscar night. My best guess is that last night locked a nomination for Dicaprio, locked a win for McConaughy and Leto. Director is still up in the air. Right now it is between Steve McQueen Alfonso Cuaron and David O’ Russell.

Right now the Best Actor race is between Chiwetel Ejiofor in 12 YEARS A SLAVE and Robert Redford in ALL IS LOST.  Both rolls may seem very different, but in reality they are almost the same. Both are survival stories. Both actors have to convey the psychological toll that their predicaments cause. And both do so brilliantly, but in different ways. It is hard to imagine anyone beating out Ejiofor at this point, but nothing is a lock. The scenes below are examples of why Chiwetel Ejiofor and Robert Redford are the two to beat.

Matt McConaughey lost an incredible amount of with for THE DALLAS BUYERS CLUB.  I am sure you saw the pictures. Doctors were worried that his body was beginning to shut down due to his low weight, but it looks like it paid off. Many are predicting a Best Actor nomination for McConaughey and with the string of great performances lately including this years MUD, he might finally get an Oscar.

As I try to predict this years Oscar winners, I realize what a strange year it has been. The date changes have for the first time left the Oscar voters to choose nominees before any other major awards were announced. They were for the first time “on their own”. If the date changes never happened we would have seen Katheryn Bigelow and Ben Affleck nominated for Best Director.  ARGO would win BP and Affleck for Director. Not so easy this year. Some say if ARGO wins then they really hate LINCOLN and Ang Lee will win, or it will be a split. ARGO and Spielberg, or if they Spielberg wins Director than LINCOLN will win picture. I am going with the split.

I am torn in the Best Actress category. Jennifer Lawrence is the favorite to win, but I hated Silver Linings. Lawrence is young enough to have more opportunities to win. Emmanualle Riva is 86 and has been acting most of her life. It is now or never. But the old white guys are more likely to to vote with their penis and choose Lawrence. I am sticking with Riva and I am probably wrong, but I learned last year that going with the consensus is not always the way. Especially this year.

They want to honor LINCOLN somewhere if not Best Picture, it does after all have the most nominations. Daniel Day Lewis will win Actor, but I am torn with Best Supporting. Tommy Lee Jones has won a few other awards, but has not campaigned much. While Robert Deniro is in full campaign mode. Weinstein and Co. are trying to make SLP more about mental illness than a romcom. Deniro crying with Katie Couric about David O’Russells son’s fight with mental illness. Ugh..it is a romcom and a bad one. All 5 Supporting Actor nominees have won Oscars before, so maybe it is Deniro’s time again, but I am going with Tommy Lee.

Achievement in Makeup and Hairstyling
Hitchcock
The Hobbit: An Unexpected Journey
Les Misérables

Achievement in Visual Effects
The Hobbit: An Unexpected Journey
Life of Pi
Marvel’s The Avengers
Prometheus
Snow White and the Huntsman 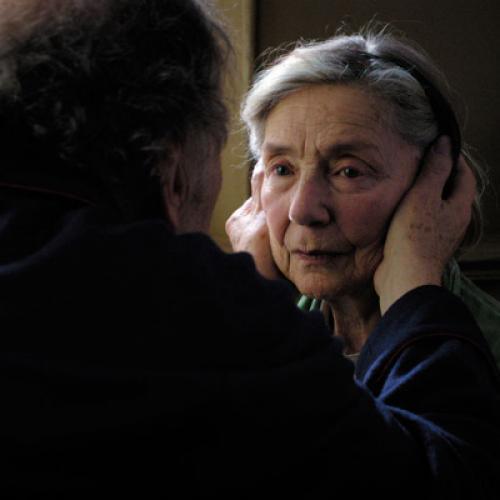 Best Picture nominee AMOUR is not exactly a happy movie, or is it?  As we celebrate Valentines Day you can not think of the love the husband has for his wife in AMOUR. A man will do anything to care for his sick wife. It begs the question, how much is too much? When can you let go?

While AMOUR will not win Best Picture, it will win Best Foreign Language Film. Emmanuelle Riva plays the sick wife who must be cared for by her husband. Riva is nominated for Best Actress. She is the oldest nominee ever for in the Best Actress category. She will turn 86 on Oscar night February 24th. Jennifer Lawrence is the favorite to win, but what an honor it would be for Riva to take home the Oscar. Reports are that she is very frail, but rumor has it that she will be attending the Academy Awards if she is able. Watch the scene below and try to convince me that Jennifer Lawrence gave a better performance.

Here is a clip of a real life couple suffering the same obstacles, but define what love (amour) really is: