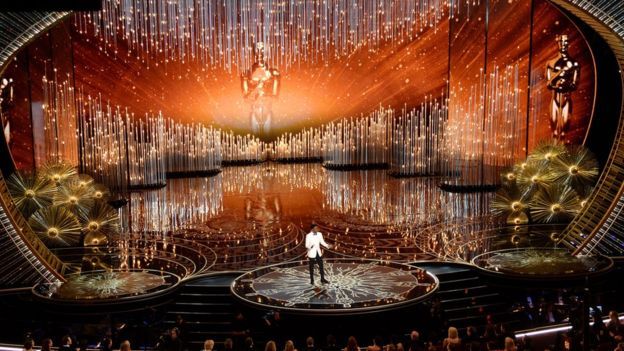 Sunday nights Oscar telecast was all about the #Oscardowhite hashtag that went trending as soon as the nominess were announced. Host Chris Rock went there with his first line “Welcome to the Oscars, also known as the white Peoples Choice Awards”. The monologue dealt almost entirely with the lack of diversity and “racism” as called out by Rock.

The show became obsessed with the race issue. Even the pre-recorded bits micked the issue.  Whoopi Goldberg showed how hard it is to get black characters into films. The funniest was Tracy Morgan as the Danish Girl. “These danishes is good girl”. Rock interviewed moviegoers in Compton who didnt think the nominated films were real. Chris Rock did a great job when it could have gone horribly wrong. There may have been too many race joes, but monoloque was strong and Chris kept the show moving.

*They announced the winners in the order that a movie is made starting with the script. The rest of show seemed to stray from any kind of order.

*Graphics came up explaining the presenters in case you didnt know who they were.

*A scroll of thank yous ran below each winner while they walked up on stage. It defiantely made the acceptance speaches shorter and livelier. Although some still read us all of the names.

*Have no idea why Stacey Dash came out.

*Lady Gaga knocked it out of the park with her ‘Till it happens to you” song from from the documentary The Hunting Ground. Strangly Sam Smith won the Oscar for the worst song of the year.

We spend the entire year predicting the winners. When the big show actually happens and you realize your predictions were for naught and the whole thing is stupid, you are ready to start looking ahead to next year.

All 145 Documentaries Contending For An Oscar

The Birth Of A Nation Living Poster